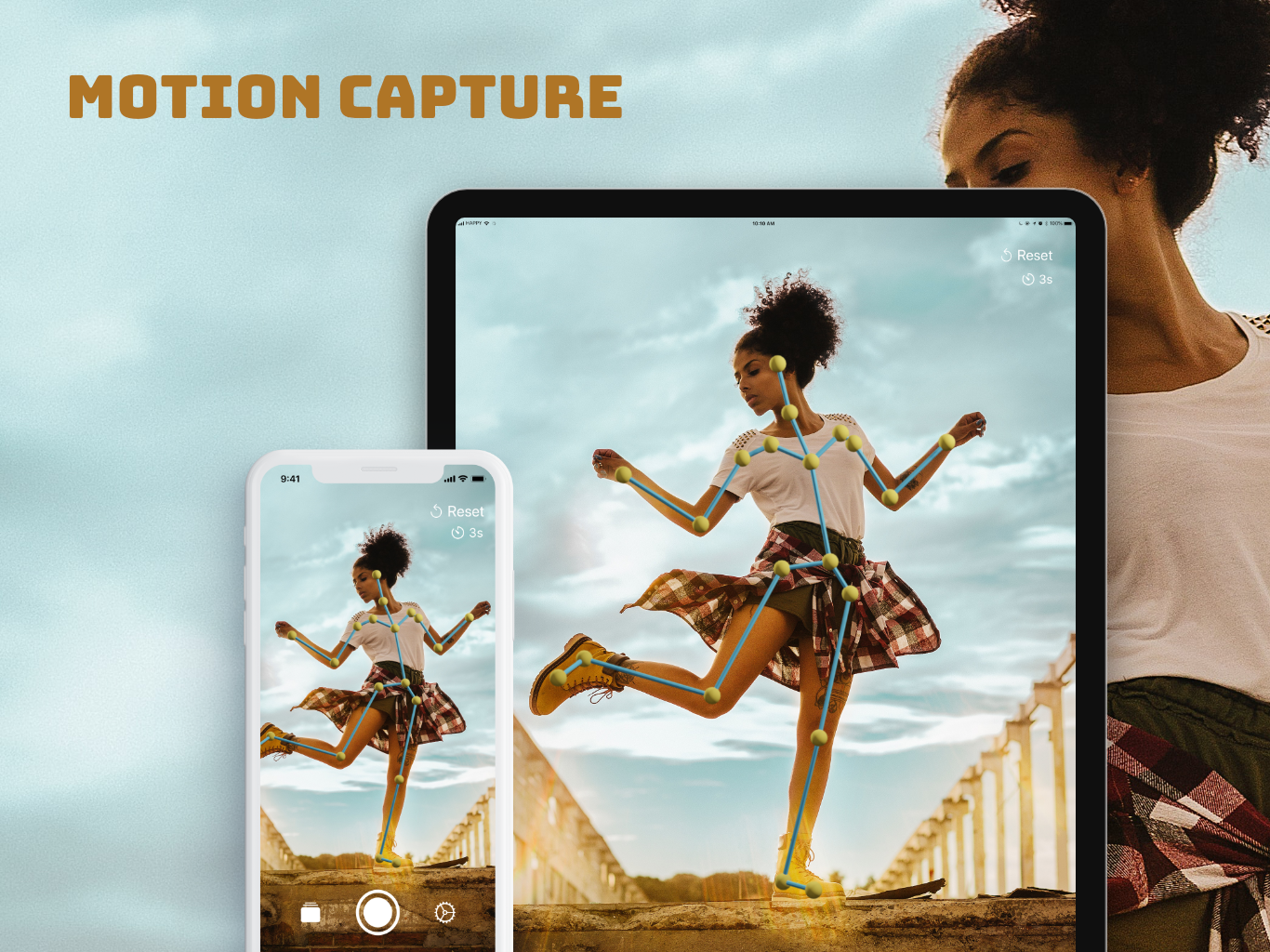 MoCáp turns your iPhone and iPad into your motion capture studio! Rise your iPhone or iPad, point the camera toward a person, and start making your motion capture masterpiece. It saves the motion data into the flexible bvh file. You can then use it in your favorite 3D character creation tool, like Cinema 4D, Maya/MotionBuilder, Blender, Poser, to name but a few. 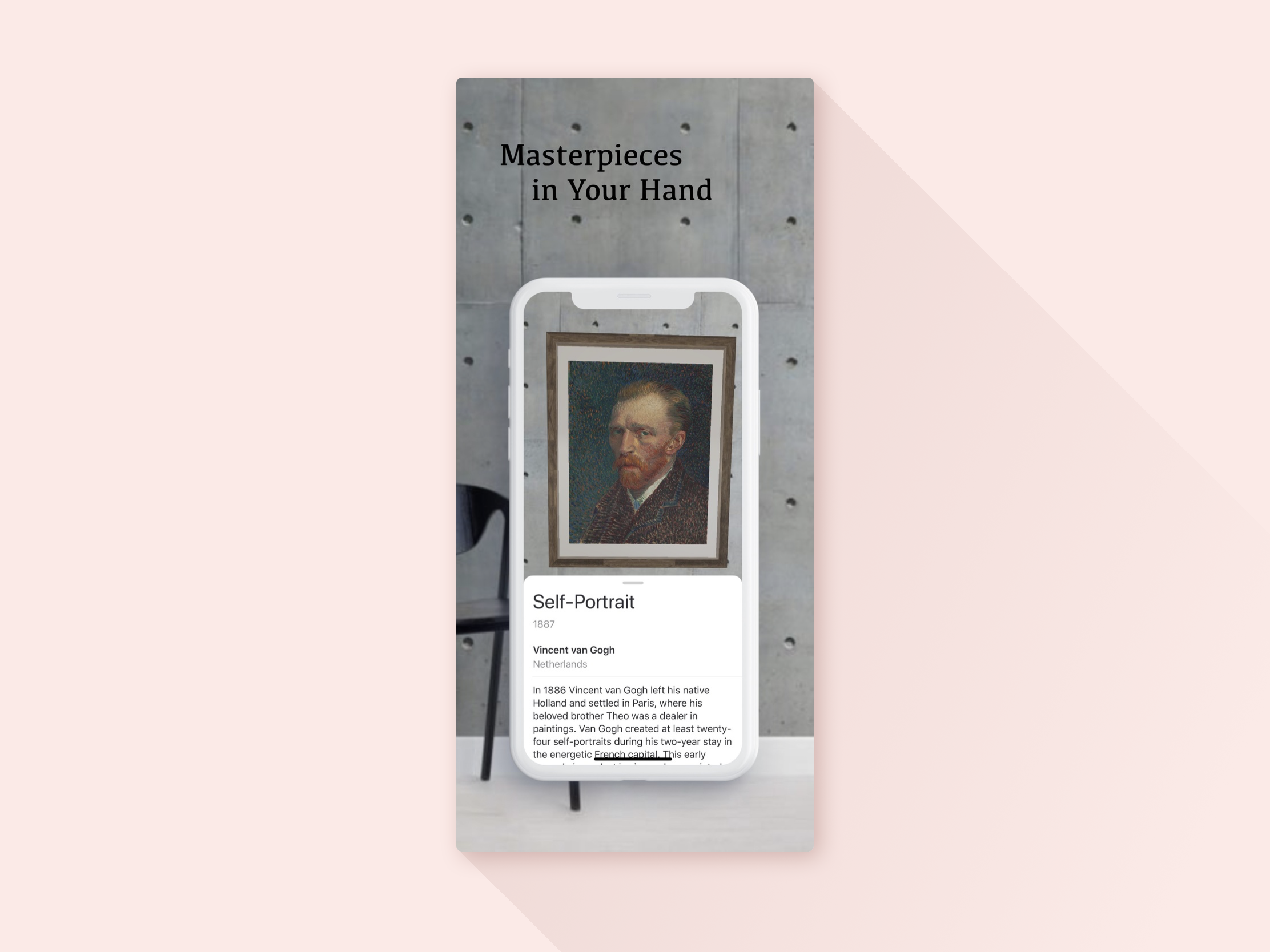 Gallery AR turns the wall, the room, the house or even the city to the gallery with bunch of famous masterpieces. The app integrates the open art databases from Chicago Art Institute and places the art masterpieces on the walls in your space. As easy as holding the phone against the wall and start the art tour right away. Try walking as close as you can and don’t worry to be kicked out by the secuity guard. Just be careful with the walls ;) 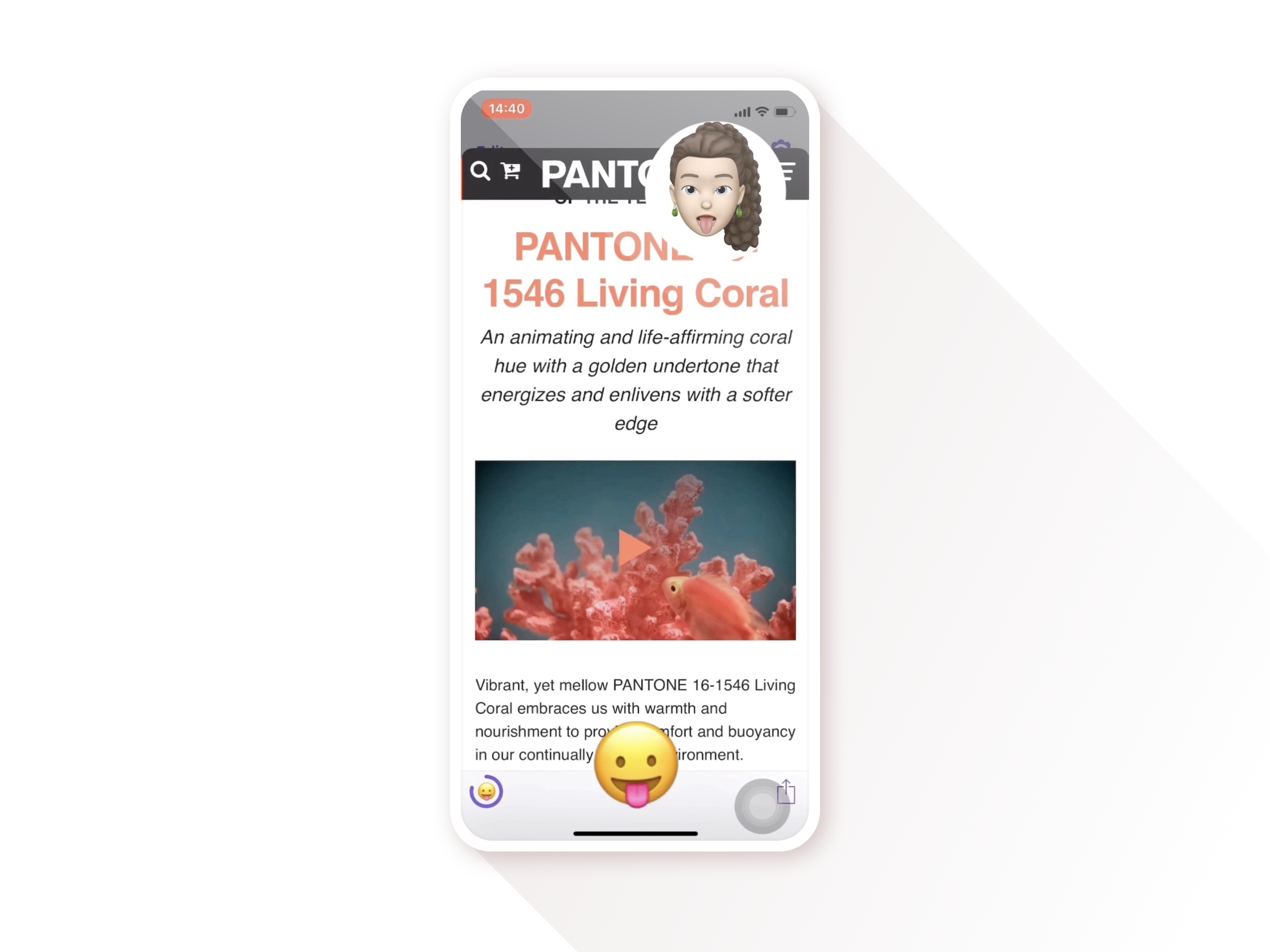 Facroll frees your hands when you browse the websites. By using iPhone’s face recognition technology and AI-powered Fasture library, you can use your facial expressions to surf in the webpages. The Fasture libray is empowered by Apple’s CoreML technology and improves the recognition ability to facial expressions overtime. The app is also the working showcase to demostrate how to integrate these two treding techologies to good user experience. 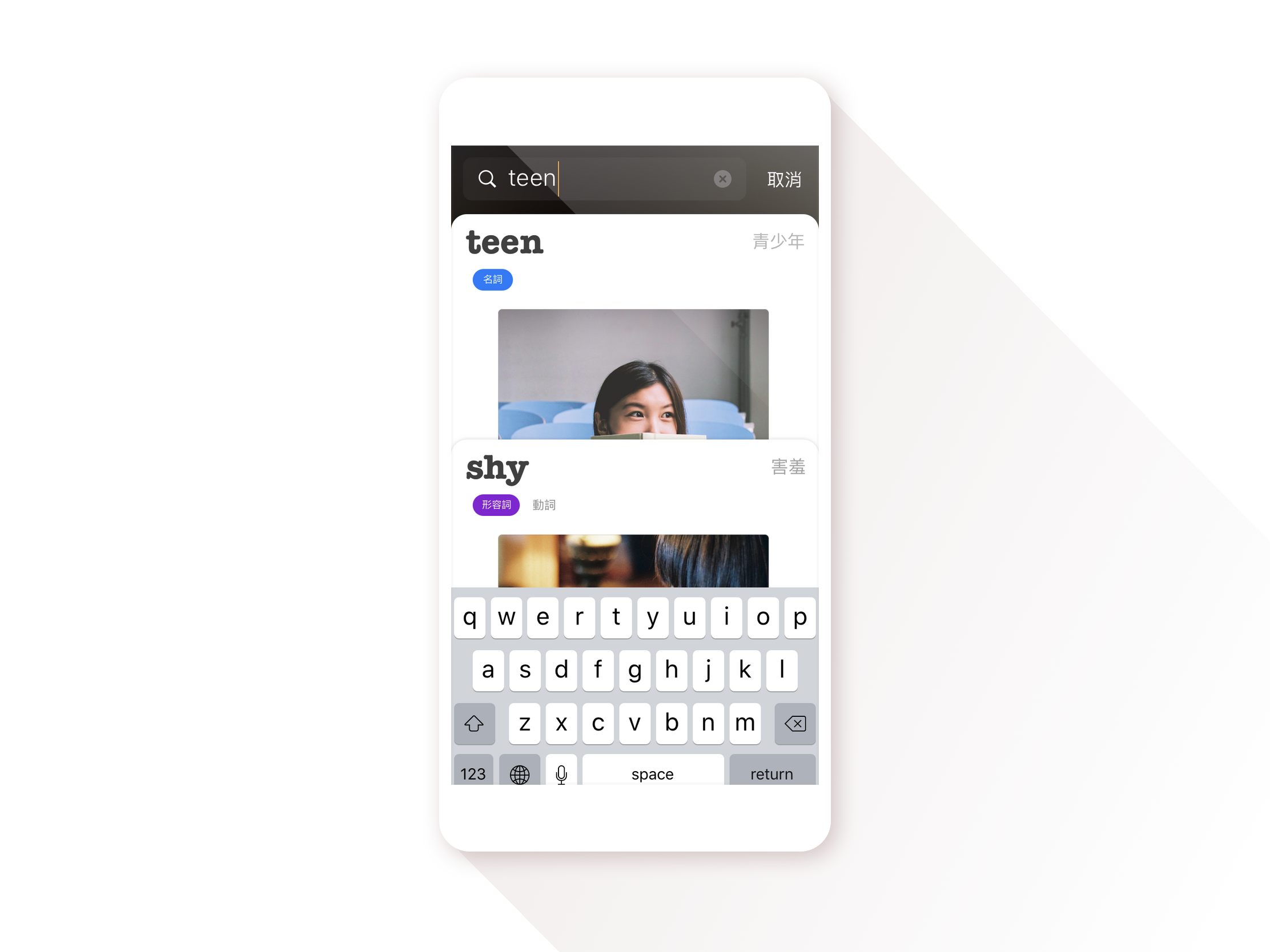 Woca let you remember words from communiy-craftd picture cards. Pictures are the best way to learn new words and things and the app just helps you to remember them firmly. The camera inside the app is empowered by AI and AR technologies. It’s yet another platform for Diing, the Taipei-based IOT/AI startup, to explore the cutting-edge technologies. 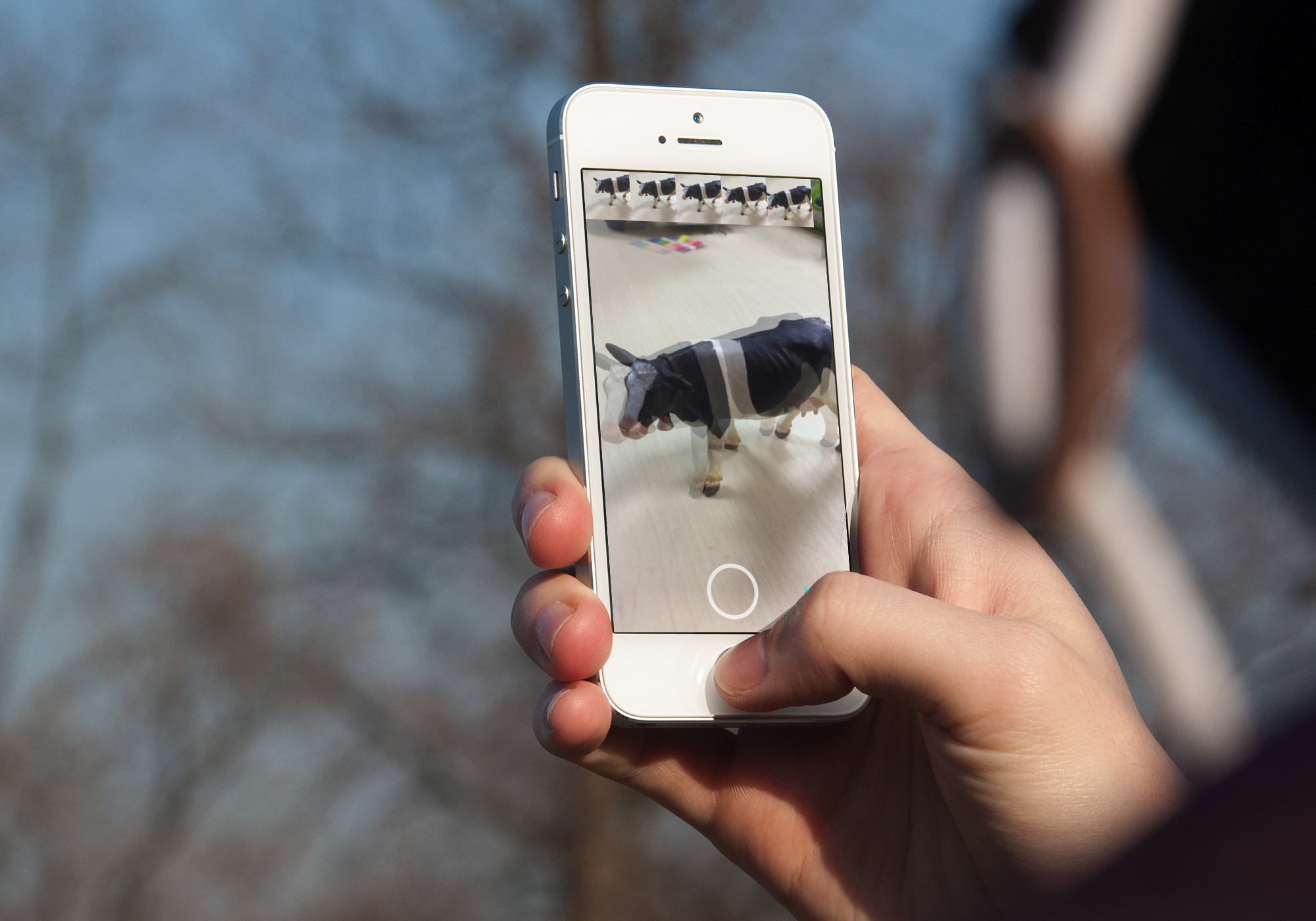 We all love animated GIF! Stueck is easy-to-use GIF camera app. With Stueck you can create GIF frame-by-frame. It might be the simplest GIF creator. You just take pictures, aka. frames, and then set up speed, more turtle or more rabbit. That’s it! 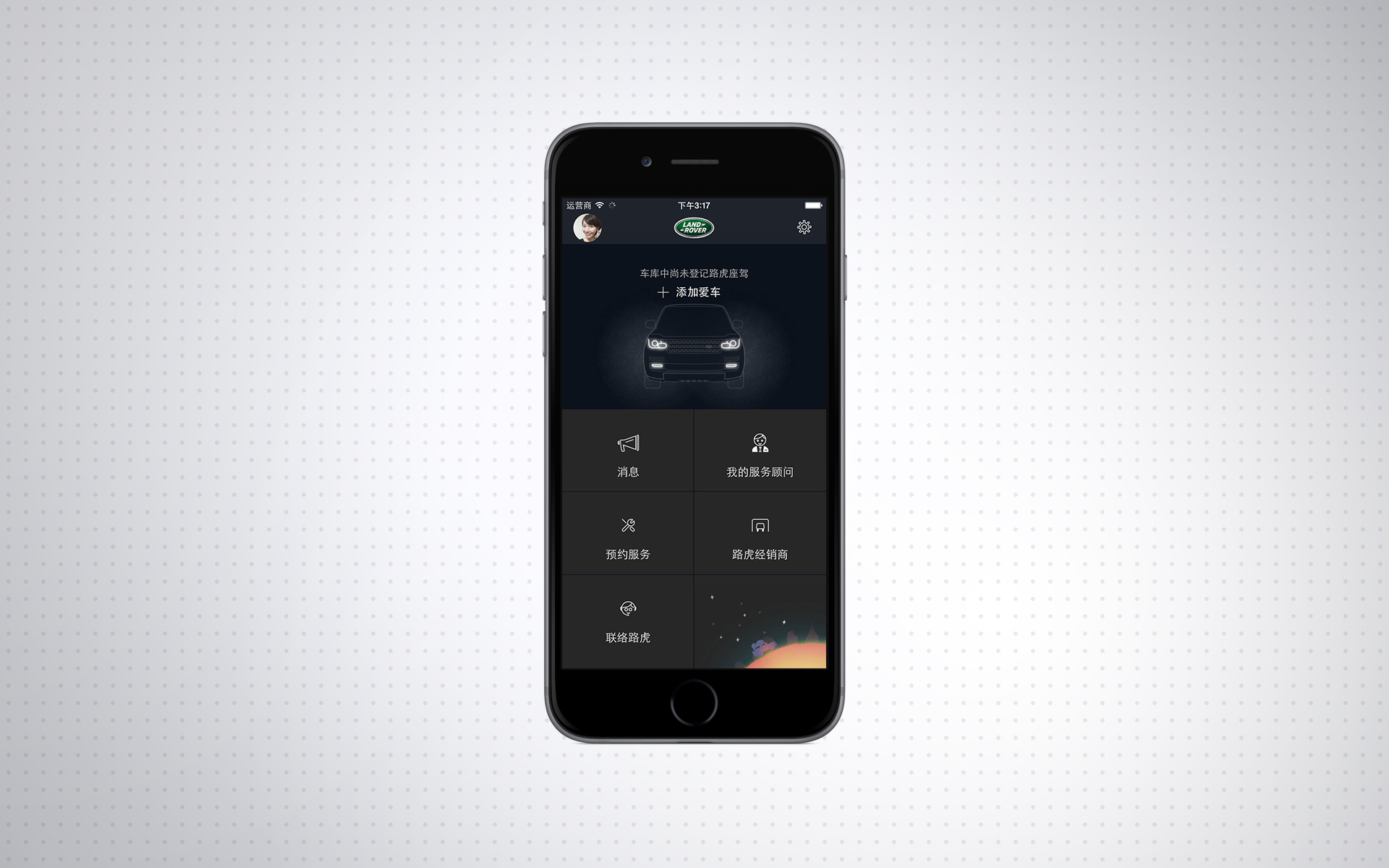 Land Rover China was building their manufacturing chain in China. In MobiApps, we cooperated with Shanghai team and developed the sales channel system for customers and dealers. With our interaction model, service agents and car owners could communicate through instant messaging and managing service booking in hand.

The clever of the model solved the difficulty of integration of multiple dealer’s management system. It also improved Land Rover China’s control on first-hand saleforce and customer feedback. 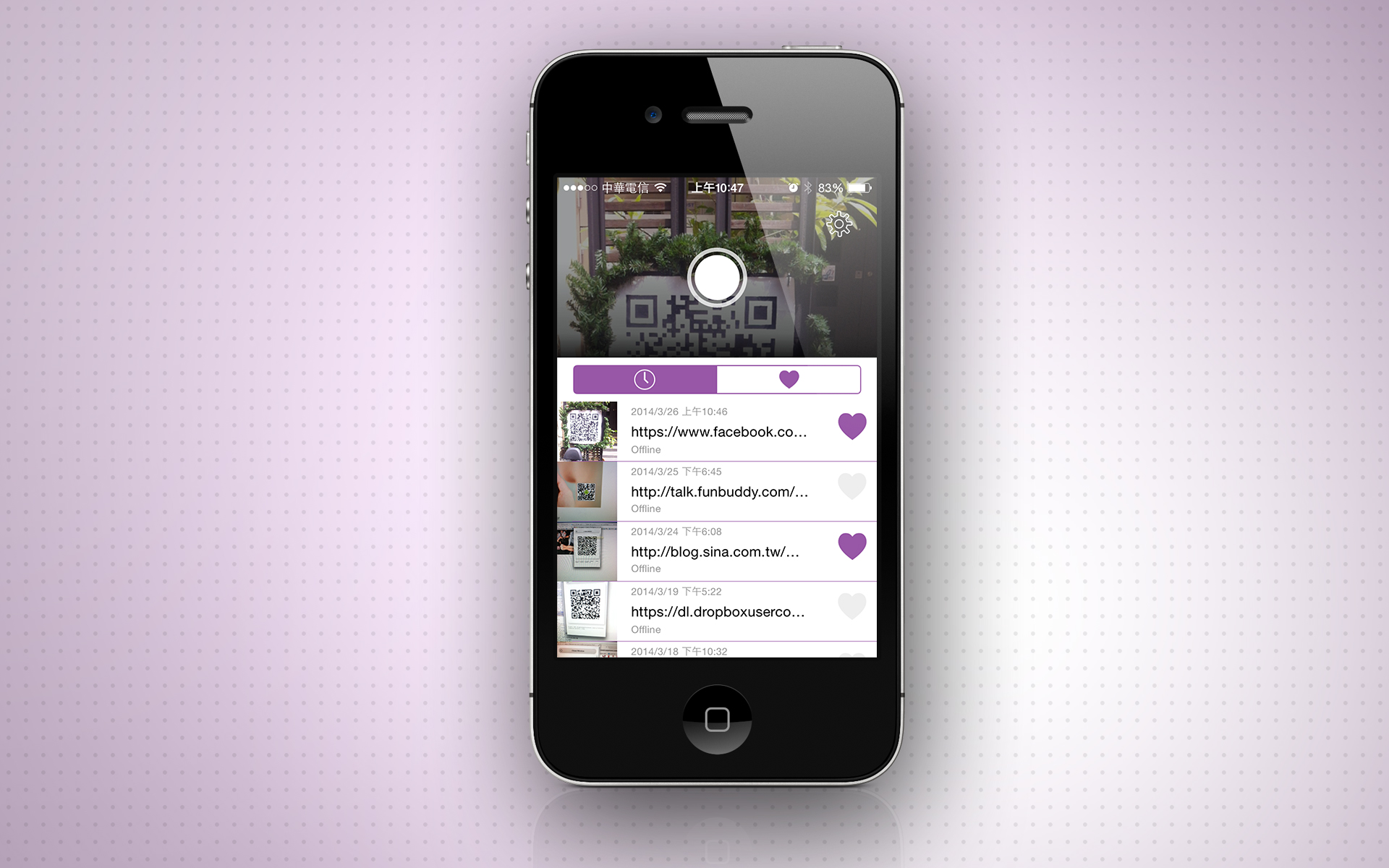 The idea was from the scenarios from street. Image that you saw a QR code on the street. You realized it’s shit only when you already visit through it. With Qute people can see the comments from the world about the QR code and you decide to continue or abort the visit.

Beyond that, Qute keeps the scan picture and displays it as part of result. Not only for the visual, but also for the memory. People may recall where the QR code is by the surrending of the QR code in the picture. 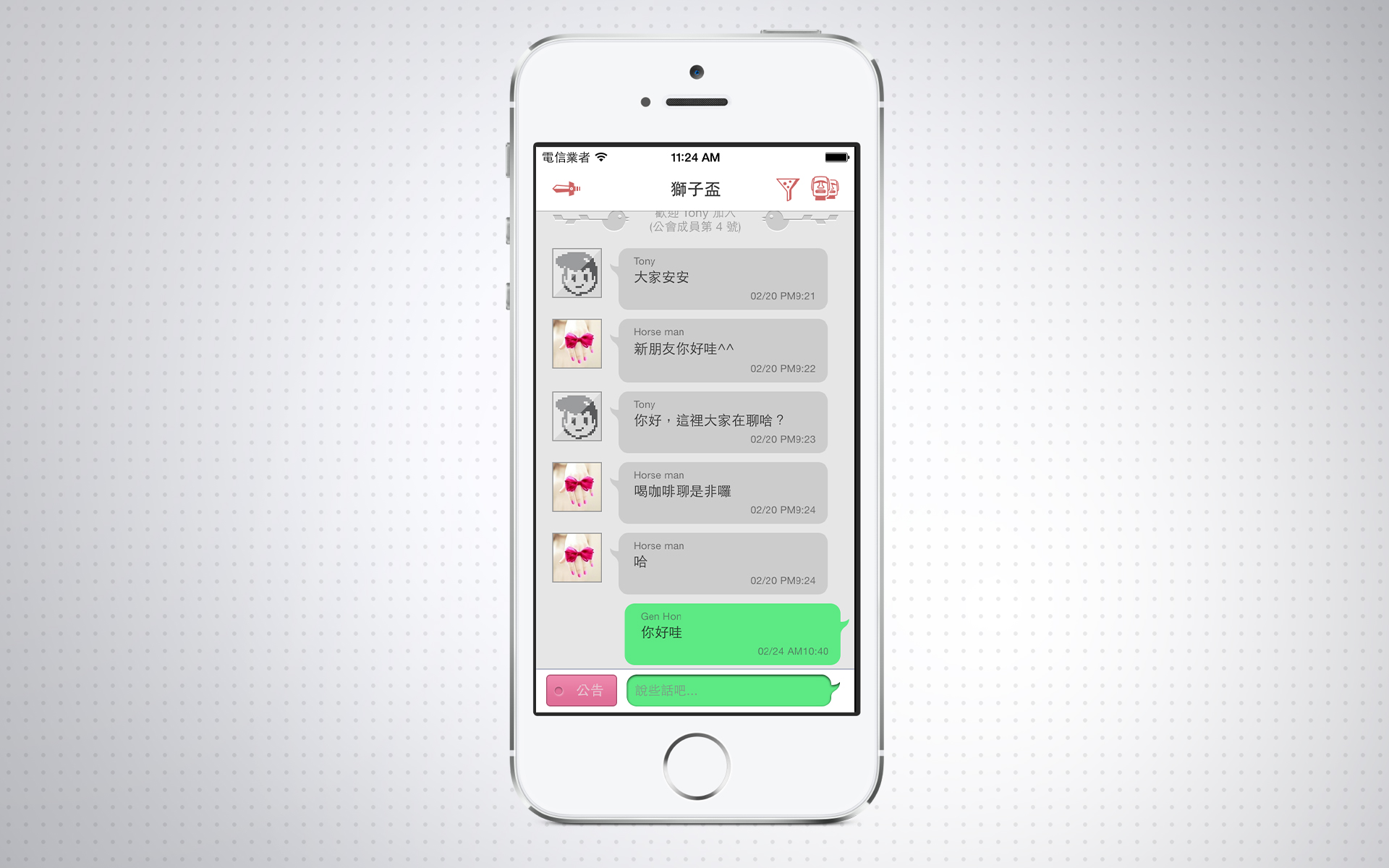 People shall be able to talk at any time, any where, even they are offline of the online game.

GamerCaht is an app to let Gamers to continue talking on the go. The app inherit the nature of online game: Multi-role for single person, Guild(Group) communication, and Fun-factor passcode. The piano was designed to play the passcode to integrate the joy in practice. The multi-role system was designed to bring gamer’s experience into chatting. 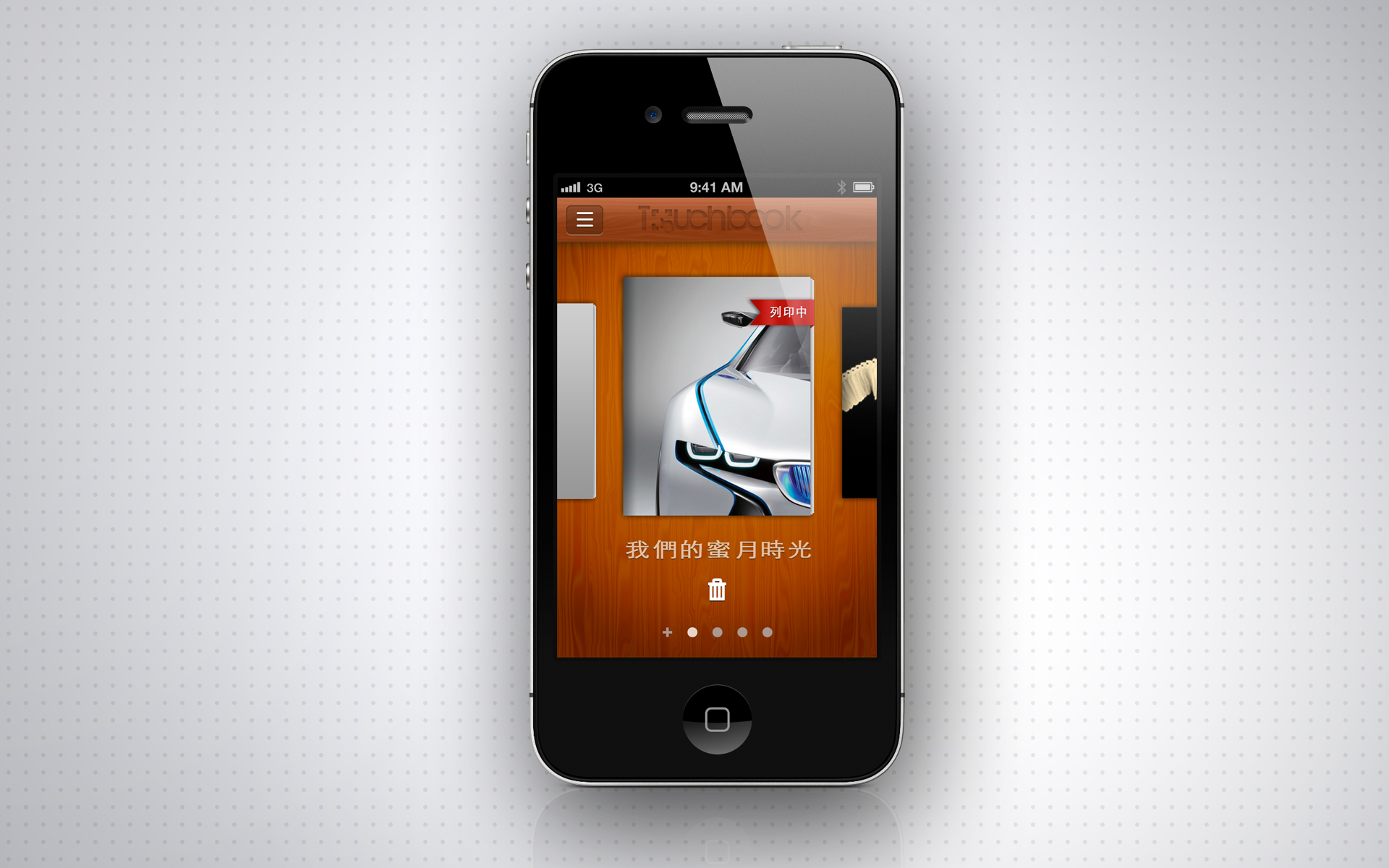 The app provided the leasure way to create the memory book with traveling pictures. The inventing instruction and realistic theme are applied in the app. 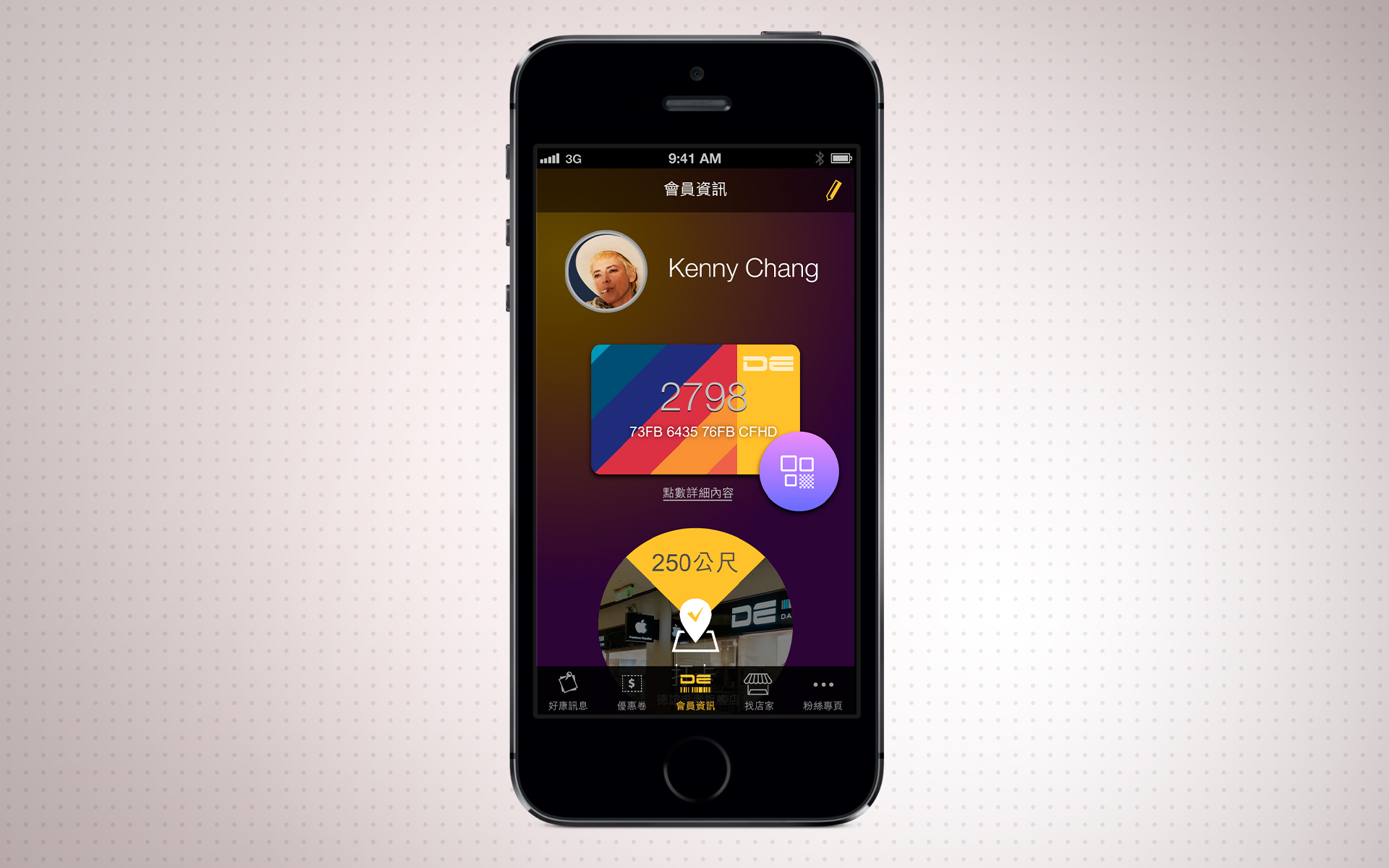 In end of 2012, I start leading the UX and UI design team in MobiApps. MobiApps helps the clients to build mobile apps for retail sale and small business. With templating design system, the mobile app can be quickly built and delivered. The flexibility of the team aims to create cutting-edge concepts, for example, smart no-content mode, social biz UI, etc.. Yet, the variety of prototyping tools are used to quickly test and prove concepts.

The big innovation event in Munich! Munich Creative Business Week. I designed a webpage to present speech schedule in Pilotfish booth. It’s all about time! The main part of this design is the time-line and the blobs of speakers. As requesed also made the pdf version and invitation card. 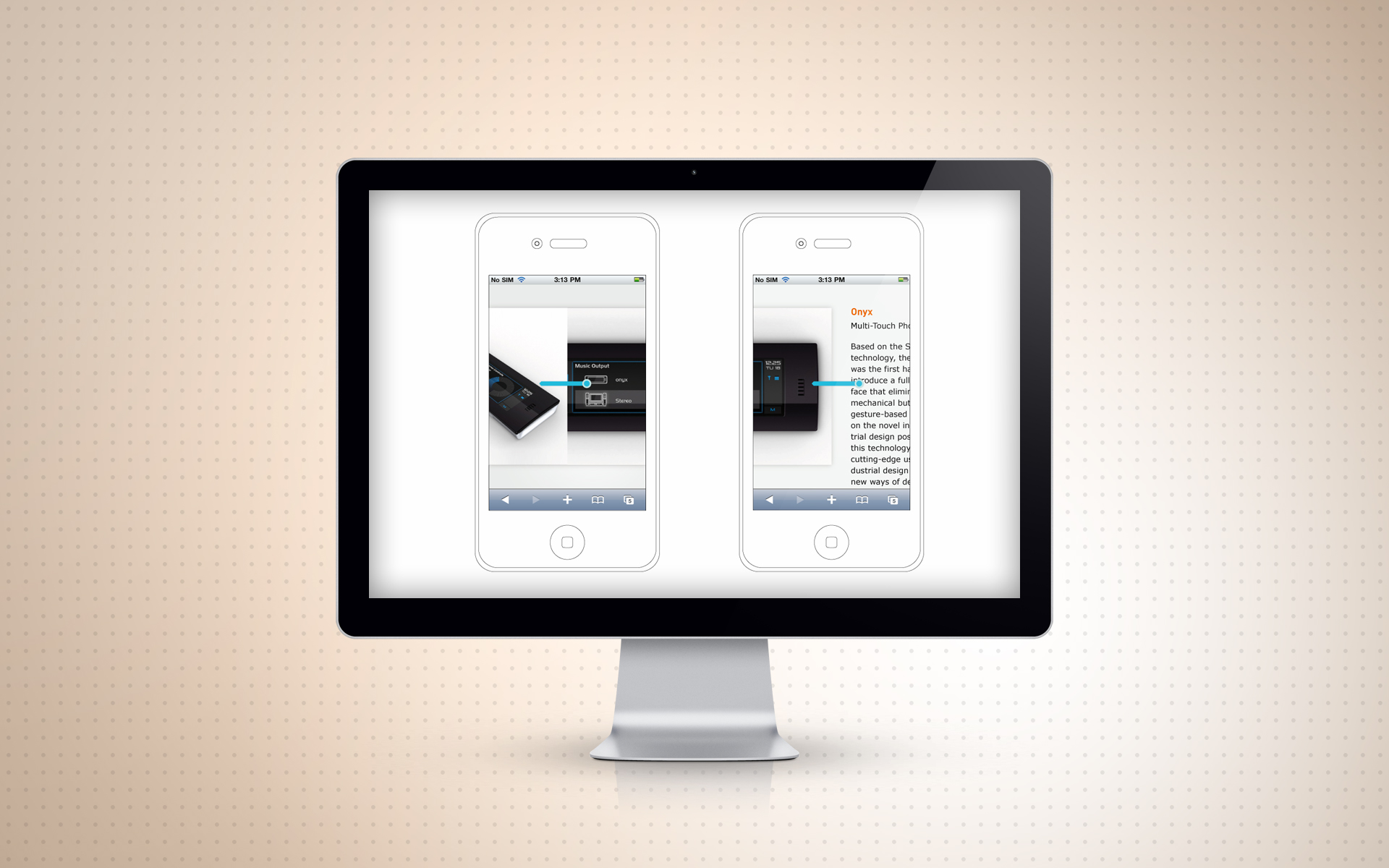 Pilotfish was reforming official website to meet fashion web spec, aka. no flash, go mobile. I was in the team to redesign the flow/wireframe of new offical website (include desktop and mobile version). I made bunch of demo units in HTML to present flow, transition and movement to developer outsourcing. 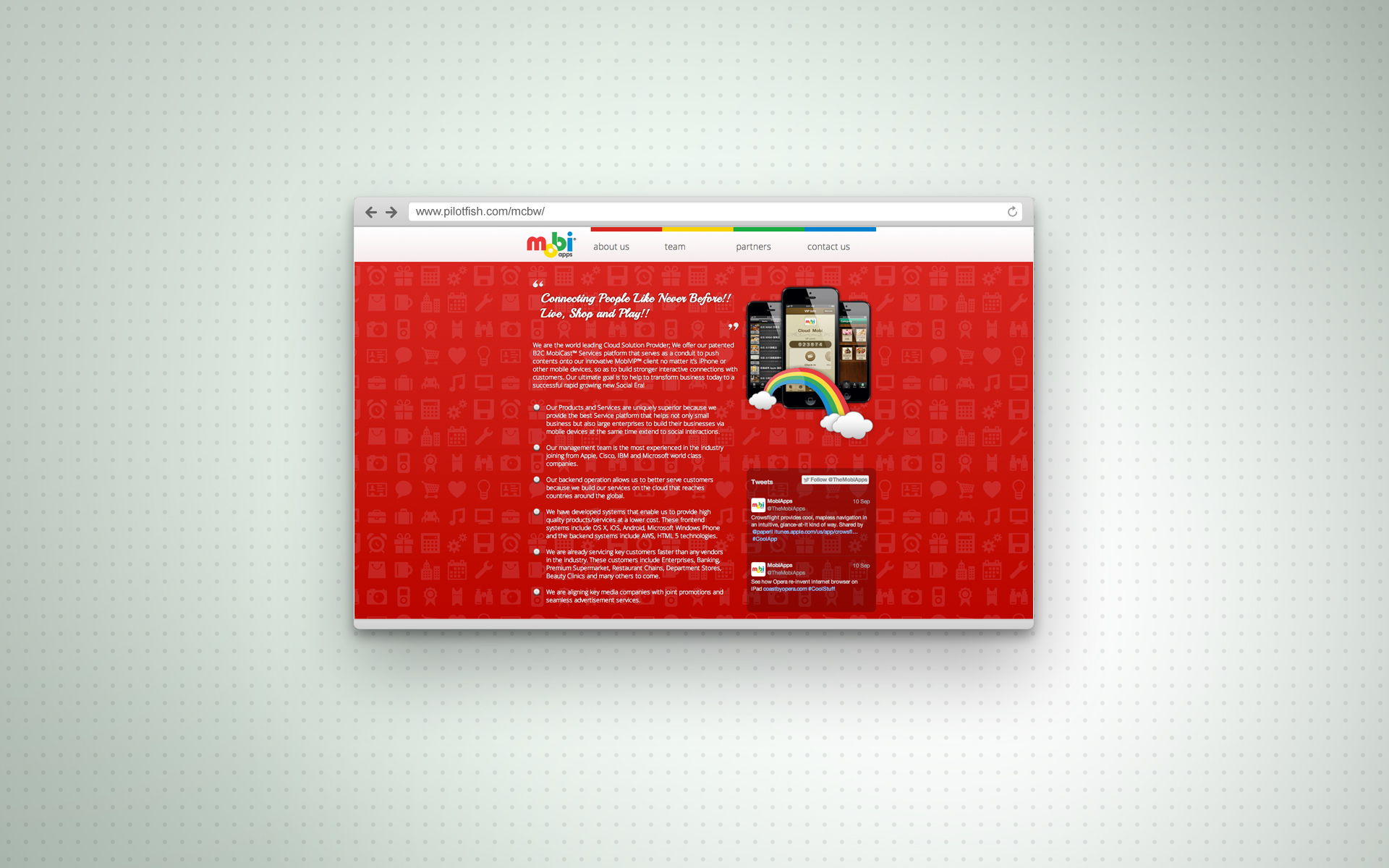 TheMobiApps, the mobile app start-up in Taiwan, was planning to build the company identify prior to media publishing. I designed the whole new website with the 4 key colors in the company logo. The website consisted of the touch keys in present design trend, one-page scroll, simple and html5. It is planned to publish in March, 2013. 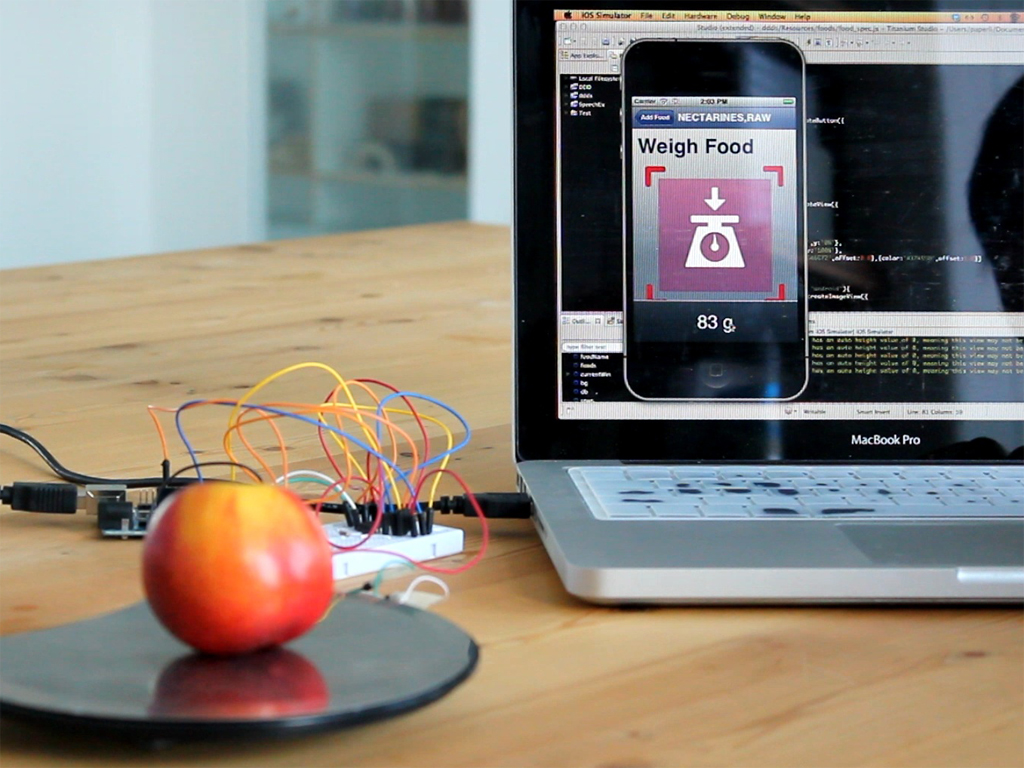 We count for Diabetics!

Diabetics count after dining for blood sugar balance. It may be simple counting for adults, but for kid it’s the problem.

I was joining the team in pilotfish for solving this matter. The project contained two parts: iPhone Case with weight scale and the app to count the sugar contained. I made the wired scale for food weight and passed in cloud. The app count the sugar quantity based on online database and the food weight in cloud. The demo kit proved the concept and gain the success in the in-house design competition.